Formal and public withdrawal from the Save the Family Home campaign

With deep regret and concern for the Farooqi family, our two organisations are formally and publicly withdrawing from this campaign with immediate effect.

As we have consistently maintained, saving this particular family’s home from confiscation is in every homeowner's direct interests, and in the wider human rights interests of society as a whole; this has never been a single issue or a Muslim-only issue. To date, no legal decision is going to be made about whether the Farooqi family home should be confiscated or not until the outcome of the father’s (Munir Farooqi's) appeal against his criminal convictions; it is the appeal on his criminal case that is now centre stage.

In our view, and based on our experience, campaigns that work hand in hand with campaigning and principled lawyers succeed. In this instance, it is no longer sustainable for our organisations to remain as members of this campaigning group.

We will be maintaining a watching brief and will create commentary as and when we deem it to be appropriate.

NB: The campaign page as it developed during this campaign is stored below. 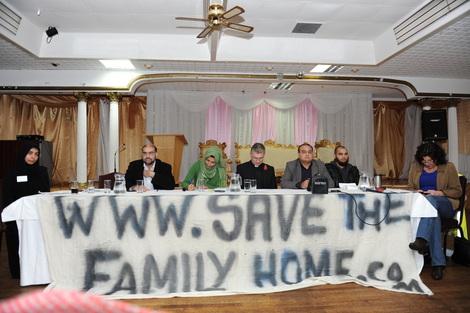 Update 02/11/11 - Over 160 people packed out a public meeting on Monday (31st Oct) in support of the Save The Family Home campaign. They heard speakers including representatives from MPACUK (Muslim Public Affairs Committee UK), Cageprisoners, Madina Mosque, RAPAR, Manchester Somali Men's Forum, and members of the Farooqi family themselves (see below). A petition against making the family homeless will be publicly handed in to CPS on Tuesday November 8th. See full press release here: Continuing with CPS  threat to make Longsight family homeless will have “massive impact on community relations”

The ‘Save The Family Home’ campaign is to stop the collective punishment of the families of individuals convicted of crimes. It has been launched in response to the Crown Prosecution Service’s threat to forfeit the home of the Farooqi family, who live in Longsight, Manchester. The family includes a seven-month-old baby and an eight-year-old child. The Farooqis have been told by the CPS that they may be made homeless as a result of Munir Farooqi’s recent conviction on terrorism charges.

Mr Farooqi, the father of the family, although appealing against his conviction, is currently serving a prison sentence. However, the CPS is threatening to collectively punish the entire family by applying for a forfeiture order under the Terrorism Act. If granted, the order would enable the property to be sold and the proceeds placed into the Magistrates’ Court.

It is very rare for families to face this form of collective punishment, and although it is part of the terrorism legislation it has never been applied in practice before now. We believe that punishing the families of an individual convicted of a crime is highly unjust.

Munir Farooqi’s son Harris lives at the house with his mother and other members of his family, and was himself acquitted of a charge of preparing for an act of terrorism. He says: “I have been through hell for the past two years. I cannot believe what the police are doing to me and my family.

“There are five adults and two children living at the house.  My younger sister is eight and my other sister’s baby is only seven months old.  We are all innocent of anything and my father is appealing his conviction. This has been our family home for years and I feel so sad that my mother and family have to go through this nightmare.  We just want to live in peace and want the CPS to reconsider its application for the forfeiture of our home.”

Harris’ sister Zulaikha says: “My daughter is only a few months old. She is innocent as we all are. We never expected this from the police.”

So far the campaign has been petitioning people attending mosques in the Manchester area, and the police have now called the Imams into Longsight police station to discuss the campaign. No family members or other campaign representatives are being allowed to attend this meeting. The campaign believes that this is an attempt by police to influence the Imams against the campaign, thereby putting serious pressure on it to shut down. The campaign asserts the right to protest without police harassment, be it direct or by proxy.

Please show your opposition to the injustice of punishing a whole family – including young children – on the basis of one family member’s criminal conviction, and your objection to police pressure on a peaceful campaign against an unjust law: