Keep the Vahidi family together and safe. Sign the petition here

18/04/12**Farid Vahidi On BBC Radio Manchester**Farid Vahidi, RAPAR's Leadership member and Acting Volunteer Co-ordinator talks about his family's journey through the British asylum system. He talks about the sponsored run that he and his younger brother Farhad are running on May 20th to raise funds for RAPAR. And he explains how RAPAR works.The Sound footage is from BBC Radio Manchester that was broadcast on Wednesday April 18 2012.Please click here to listen to this interview.

09/04/12 **RUNNING FOR RAPAR**
The Vahidi family, on point of being removed from the UK, have WON their asylum case.
Brothers Farid and Farhad to raise money for RAPAR in the Great Manchester 10k Run 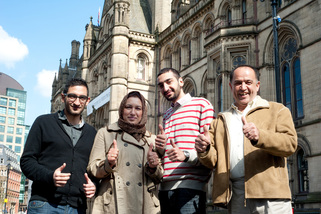 (From left) Farhad, Zahra, Farid and Mohammed Vahidi
The Vahidi family - who went into hiding only hours before UK Border Agency officers arrived at their home in Gorton, Manchester, to forcibly remove them from the UK - have won their case for asylum.


An Asylum and Immigration tribunal judge ruled that it would be unsafe for Mohammed and Zahra Vahidi and their 19 year old son Farhad to be returned to Iran and they can now stay in the UK.  The family's eldest son Farid's case is separate and still ongoing -  his campaign for asylum continues.


Farid and Farhad are members of RAPAR whose volunteers have been working with them on their asylum cases for nearly two years. On May 20th, they will take part in the Greater Manchester 10k run to raise funds for RAPAR.
Read the full press release here. To find out more about the run, click here.
To SPONSOR the Vahidi brothers, go to:  https://mydonate.bt.com/fundraisers/vahidibrothers

Mohammad, Zahra and Farhad Vahidi arrived in Britain from Iran in 2006, and applied for asylum in January 2007.

Their asylum application was refused and all other avenues were gradually exhausted. They were told by the UKBA in July 2010 that they were required to leave the country, or face enforced removal.

Mohammad and Zahra are currently being held in Yarl’s Wood detention centre, and their son Farhad, who recently turned 18, is in Harmondsworth detention centre. All three are fighting to avoid removal.

If the Vahidis return to Iran, they will face severe persecution and potentially even execution. The Vahidis have made extensive efforts to secure legal representation in Iran, but lawyers there are declining to act for them.

Anybody who has been following the news recently will be aware that the threat of persecution is more serious than ever, as the Iranian government intensifies its vicious crackdown on any persons it perceives as a threat to itself, in response to the recent wave of pro-democracy action in the Middle East. In January 2011, Iran averaged around 2 executions a day. Iran currently has the highest rate of executions per capita in the world. Yet, at the same time that the UK and the US governments issue statements condemning Iran’s human rights abuses and political oppression, this country continues to deport Iranians back into grave danger.