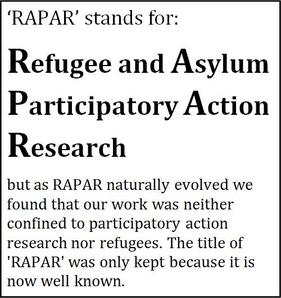 In 2001, RAPAR’s founders were approached for help by community health, cohesion and social work practitioners who were confronted with a new population when refugees, forcibly dispersed to these practitioners' localities in North West England conurbations for the first time, became their ‘clients’.

Drawing on our skills and networks as clinicians, epidemiologists and social scientists, our personal identities as refugees and second or third generation migrants to the UK, and our professional relationships with community development practitioners, RAPAR gradually became live.

RAPAR began to reach the national media with our research about what was happening to people seeking asylum from both Iraq (2003) and Somalia (2004) and to their local communities here. Since 2005, RAPAR has been talking publicly about the relationship between the history of colonialism, the creation of tax havens that service multinationals, the arms trade, the war on terror and ….becoming a refugee. Watch the video here

During 2004-5, RAPAR faced highly concentrated - and highly placed - efforts to stop its work in its tracks; see 2011 University of Oxford PhD thesis by Joshua Hatton entitled How and why did migration and refugee studies (MARS) facilitate migration control? (click here for pdf) particularly section 4.3. on power and practice (pp.254-278).

The organisation originally comprised researchers, policy formulators and front line practitioners within key statutory services, and small pockets of displaced people.  At its inception, it aspired to the continuous development and delivery of action-orientated research, community development and individual casework about and with - as opposed to on and for - displaced people and their surrounding communities. This aspiration continues.

Click here to view the description of RAPAR's first meeting