281117 - this page will be updated very soon. Thank you for your patience. 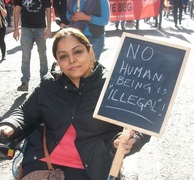 Manjeet Kaur
Chair
Manjeet, an Afghan national who lived in India, came to RAPAR as a service user in 2011. She is seeking asylum in the UK following a series of threats and attacks which were made on her life after her husband (a journalist and activist) disappeared. These issues are made all the more complicated by her medical condition and her need for a wheelchair. Manjeet is at the forefront of her own campaign, which has had a number of successes to date, and provides continual support, aiding research projects and other campaigns within RAPAR. 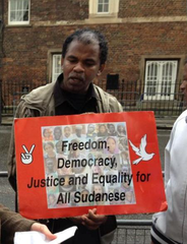 Mohammed Al Halengy
Leadership
Mohammed came to the UK in 2006 from Eastern Sudan in order to flee persecution for being a member of the marginalised Beja tribe.
Mohammed has campaigned for the equal representation and power sharing of the Beja people and an end to their marginalisation within Sudan.  For RAPAR, Mohammed regularly represents the organisation externally and, through his extensive political and social networks and his multiple social skills, he enables intensely vulnerable people to access what they need.

Farid Vahidi
Volunteer
Farid, aged 24 years old and from Iran, first became involved with RAPAR in 2010. He came to the UK in 2007, joining his family to seek asylum from persecution in Iran. His case was refused and his parents and younger brother were detained and told they had to return to Iran in 2010; Farid was at the forefront of the family's campaign, and as well as fighting for his own and that of his family's right to remain in the UK, has since helped to develop and sustain other campaigns and work within RAPAR. Farid became a leadership member in 2011 and provides continual support within the organisation.

Kathleen Grant
Secretary/Press Officer
Kath is RAPAR's Press Officer and has worked throughout the UK as a staff journalist and, more recently, as a freelance writer, sub editor and reporter.
A long standing member of the National Union of Journalists, Kath is Secretary of the NUJ's Manchester and Salford Branch and is a branch delegate to Manchester Trades' Union Council. She started volunteering with RAPAR when she was working on NUJ campaigns for journalists seeking asylum in the UK.
Kath is involved with all aspects of RAPAR's work, particularly campaigns. 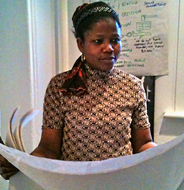 Mary Adenugba
Vice Chair
​Mary, born in Nigeria into a Muslim family, is a Christian convert. She was trafficked into the UK in 2004 and exploited for three years, but despite this, her asylum claim was refused. She has since developed her own campaign within RAPAR to support her appeal. Mary has taken on a number of other roles within the organisation, helping to support other campaigns and undertaking administration work. 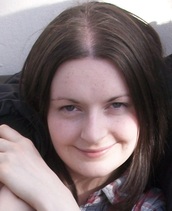 Sophie Gardiner
Creative Arts
A young artist born and raised in Manchester, Sophie came to RAPAR in 2012 while in the midst of her university course, asking to work with members for a project that would become 'Greetings From Manchester'. After completing her degree, she stayed on as the organisation's official artist-in-residence, as well as acting as campaign manager to the 'Justice & Security for the Famakinwa Family' campaign, is heavily involved with YoungRAPAR as well as engaging with other casework and RAPAR publicity. She now functions as the organisation's Arts Development Officer and Volunteer Co-Ordinator.
She graduated from Manchester School Art (MMU) in the summer of 2013 after completing her course in Interactive Arts and is now a working artist and workshop facilitator. 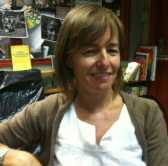