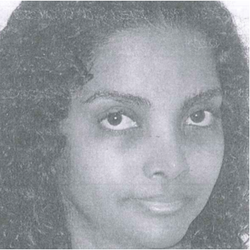 My name is Juliet Jaryan Kollie and I am a 45 years old from Liberia. I am currently being detained in Yarl's Wood Immigration Removal Centre by the Home Office.
I have been in the UK for 22 years now. I left my home country of Liberia because as a bisexual I would have been persecuted and my life would have been in danger if anybody found out.
Living in the UK has not always been easy and I will be the first to admit that I haven't always made the best choices. In 2011, I fell in with a bad group of people. They manipulated and threatened me and as a consequence I made some bad decisions, but I was convicted and given a hefty sentence.
I have served my sentence for my crimes. I have paid my dues to the society and want a second chance to prove myself to the community, as I would if I were from the UK. I have learnt from my mistakes and I shouldn't be punished again for my crime.
But the Home Office aren't letting me do this. The Home Office now however are accusing me of being somebody that I am not, and are even trying to deport me to a country that I do not belong to, Mauritius.
I am scared what will happen to me if I am deported to Mauritius or Liberia. I know nothing about Mauritius. How can they try and send me there? It is not safe for me to go back to Liberia. In Liberia I will face persecution and discrimination because of my sexuality. I cannot go back there.
I have suffered from serious mental health conditions and have been hospitalised for this in the past. Being locked up in detention will not be good for me because of this, I am really struggling.
I need to be free so I can have a fair chance to prove to the Home Office who I am and that I would be in real danger if returned to Liberia, and unlawful to send me to Mauritius.

Juliet's Current  Situation:
Having spent 8 months in Yarls Wood Juliet is going through a mentally and physically tough time. Juliet has explained to us that now she has not been able to eat solid foods for more than a week because of the stress that she is under, and she is most anxious that if she is not released in the near future her health situation will become precarious.
​
If you'd like to support Juliet in her campaign and want to offer your help in freeing her from detention, please sign the open letter below. It is crucial to sign the open letter now, because she is applying for bail on Thursday 06/04, any signatures thereafter although, are still valuable for any further bail applications.
​​https://www.change.org/p/amber-rudd-mp-free-juliet-kollie

Information on LGBTQ Rights in Liberia

Ban Ki-moon: "Your struggle for an end to violence and discrimination is a shared struggle..."
On March 7, 2012, U.N. Secretary General Ban Ki-moon delivered a historic speech asking countries around the world to decriminalize same sex relationships, and end discrimination of LGBT people. The response at the UN? A handful of delegates stormed out of the meeting in protest. Watch this remixed version of Ban Ki-moon's speech, and let us know what you think is so controversial about it.
​

PRESS STATEMENT: Securing a Safe Place for All Liberians

March 22, 2012-PRESS STATEMENT / Immediate release from THE COALITION OF LGBTI* LIBERIANS AND ALLIES (CLA)  and THE INTERNATIONAL GAY AND LESBIAN HUMAN RIGHTS COMMISSION

When Ellen Johnson Sirleaf, Liberian President and Nobel Peace Prize Laureate, recently expressed in an interview opposition for LGBT rights—especially decriminalization—and was vague about support for increased criminal penalties for LGBT people, a shockwave was felt around the world.  LGBT Liberians everywhere and all who have great respect for Sirleaf—a former political prisoner herself—were appalled and saddened. Such a narrow and discriminatory view from a revered and world-honored leader is unfathomable.
Currently, under Liberian penal law, “voluntary sodomy” is a first-degree misdemeanor. While African nations such as the Republic of South Africa, Mauritius and Mozambique have either repealed or read down similar outdated colonial sodomy laws, some in Liberia would move backward and increase criminalization and penalties.

Gay marriage is not the focus of Liberian LGBT activist efforts.  Safety, security, respect and dignity for all Liberians including lesbian, gay, bisexual and transgender people, is the goal.

The sharp increase in public bigotry and violence targeting LGBT Liberians is alarming. As discrimination is being institutionalized, with government officials and print and social media taking dangerous, homophobic positions, Sirleaf’s remarks add fuel to an already blazing fire.  Religious leaders too are using their influence to demonize and marginalize LGBT Liberians as being un-African, un-Liberian, and ungodly.

How can we make Liberia a safer, more inclusive society for all Liberians? With the unexpected rise of criminalization, hate speech and hate crimes there is a pressing need for all who believe in basic human rights to unite in a single voice and address these issues.
Liberia is a signatory to a number of world treaties including the International Covenant on Civil and Political Rights, which guarantees the right to privacy and freedom from discrimination based on sexual orientation and gender identity. Liberia must stand by her commitment to these principles and protect all Liberians from human rights violations.

Liberia has a unique history as a haven for oppressed people.  This history deserves to be honored and Liberia’s international commitments to uphold human rights sustained. We must not sit in silence as some would divide and disrupt Liberia’s attempts to rebuild a nation where every Liberian feels safe, secure, and able to contribute towards building a forward-thinking Liberia.

The Coalition of LGBT Liberians and Allies and the International Gay and Lesbian Human Rights Commission calls on every friend, every supporter, every Liberian at home and abroad: Stand with us to stem the growing hatred and to ensure Liberia is safe for all. Appeal to the Liberian government to work in favor of laws that strengthen and protect human rights instead of laws that sanction the mistreatment of minorities. Appeal to Nobel Laureate Ellen Johnson Sirleaf to remember her commitment to international law, her experience as a formerly imprisoned freedom fighter, and that all Liberians are her children. Call on President Sirleaf, whom so many supported, to return the support with a renewed message of reconciliation, inclusivity and rights for all Liberians.